I received once an appeal to sign a petition for a state grant for speed radar signs in our village. I declined, saying that a grant would be too costly for us, and offered the following explanation.
Transfer of wealth (goods or money) by the government to a person or political entity is an act of redistribution. Rigorously speaking, what’s redistributed is not wealth, but income. A person’s income is a fraction of what the person produces for others, ultimately for the society. Even those who live on interest or dividends contribute their capital which produces wealth for the society. Therefore, the increase in income parallels the increase in resources (wealth) of the society.
After summation of all acts of redistribution, the result is a transfer from a part of the people to the other part. If we plot the resources (income) of the members of the community (e.g., country), as a function of the effort spent to generate them, we obtain a distribution, illustrated here by line A in the figure. Redistribution results in a flatter curve, B, by transferring resources from entities on the right of point X, to those on the left. The total resources (wealth) stay constant: the areas between curves A and B on the right side and left side of X are equal. 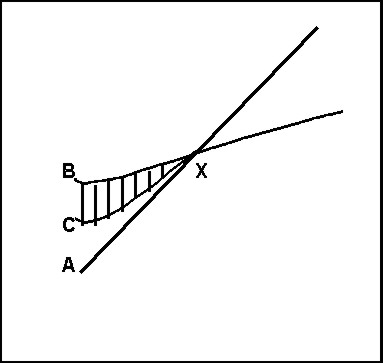 Currently, wealth redistribution is the main activity of the government. Each program, law, regulation, or initiative has been designed with wealth transfer as an important goal. This is true for Social Security, Medicare, minimum wage, charges for utilities, and above all, the income tax, with all its features and ornaments (alternative minimum tax on the confiscation side, earned income credit on the receiving side, etc.)
There are many ways in which the government confiscates money. For instance, a myriad of overlapping, often mutually contradictory, laws and regulations make certain that an individual or business will transgress something in any action undertaken The government can then collect fines or compensations, usually unpredictably and arbitrarily, as proven by the treatment of banks by the current administration. Taxes, however, remain the main source of money for the government.
In the government-driven redistribution, the beneficiaries receive only a part of the wealth taken from the givers, because the transfer itself has a cost. This is shown in the figure by curve C. What the receivers get is represented by the area between curves C and A. The area between curves B and C (hatched) is the wealth used by the transfer itself. Among other things, it assures the livelihood of those that govern the transfer (politicians) and those who implement it (government employees).
The hatched area increases with the total value transferred (area between A and B). Also, the natural and healthy tendency of men to better themselves makes the politicians and the government employees strive to increase the hatched area. For that, the latter return part of their take to the former as kickbacks. (They form unions and finance election campaigns.) When a politician acts against the trend and works toward decreasing the hatched area, he can be called a statesman. As it always happens when someone else’s money is handled, the hatched area is increased by waste, inefficiency, and theft.
A straight line for the right side of line B (as shown) applies for a flat tax. Progressive taxation produces a curve with downward concavity. Thus, both the bottom of curve C and the top of curve B have very low slopes. For someone whose income is close to either end, an increase in effort results in little or no increase in the return, which creates a disincentive to work more. This point is generally understood. Less discussed is the fact that people in the middle are also affected: Those who are just to the right side of X find it advantageous to reduce their resources (work less) and convert from givers to receivers. The loss of income is fully compensated by the reduction in effort. All these features reduce the area under line A (total wealth acquired by the individuals).
Disincentives to produce also result from the fact that line B is not smooth but has sudden changes at some points, for instance where the alternative minimum tax (AMT) takes effect. People in that income range make decisions aimed at minimizing taxes, rather than maximizing output and income. Because the income people obtain for themselves is a part of the wealth they produce for the society, wealth redistribution from a part of a society to the other part, results in a decrease of the total wealth produced by the society.
Of course, not all the money collected by the government is redistributed. There are some expenditures made for the collective benefit of all, and cannot be apportioned to individuals. Such are the expenditures for national defense and law enforcement. Some people try to lump in there the payments for education and health care, but that is theoretically incorrect, because the beneficiaries of those services are distinct individuals, represented on the diagram. For maximum efficiency (reduction of the hatched area), those services should be paid directly by the beneficiaries, to the maximum extent practically possible.
Naturally, some communities are inhabited predominantly by individuals on the right of point X in the plot; others are inhabited mostly by individuals on the left. Thus, in the redistribution game some communities are losers, whereas others are gainers. Through the merits of others than myself, our community is among the former. That our petition will result in the creation of a spike on curve B just at our position is quite improbable. Because all the allocations are the result of negotiations and compromises involving those who control the process, a grant to such a community is obtained only after all the communities represented by points at its left (and some at its right) are rewarded as well. Considering the increase in the hatched area by that action, we should expect an added assessment, by an amount greater than the grant received. Rather than request a widget from the government, we should pay for it directly or, if we determine that we cannot, live without it. As a positive contribution to the country, of which we are a part, we should then try to convince other communities and the politicians (trying to reach especially those that are statesmen) to live likewise without the widgets.
To reduce waste (hatched area on the plot), all the allocations to individuals represented at the right hand of X should be rescinded and their taxes reduced by the appropriate amount of money (allocation plus redistribution costs). The same hold\s for the communities which are net losers in the redistribution process.